Under standard wiki convention, each piece of information is linked to a published reference, such as a news article, company report, or regulatory permit. Alternate names for projects are also recorded. For each project in China, the corresponding Chinese name was identified. Once wiki pages are created and data sets are compiled, they are circulated for review to researchers familiar with local conditions and languages. In order to ensure data integrity in the open-access wiki environment, professional research analysts also review all edits made to project wiki pages.

Following every data update, results are validated against government and industry sources at both the individual and the aggregate levels.

The GFIT is updated twice a year, approximately every six months. Data updates include four components:

News articles and industry reports are used to update information about projects regardless of operational status. Examples include accidents and explosions, expansion projects, project retirements, among others. If an existing pipeline has a proposed expansion, either in its capacity or length, the expansion is added as a new project in the GFIT and to the “Expansion Projects” section of its mainline’s wiki page.

News articles, government websites, and industry sources are used to find projects that have been newly proposed since the last GFIT update.

Initially, a preliminary list of pipelines and LNG terminals was gathered from public data sources including industry, news, and government websites. Initially, all projects were included. The list was researched further to acquire additional data points and qualitative information about each project.

Currently, some missing pipeline projects are given research priority over others. Research priorities were established due to the extensive number of transmission pipelines in the world. Priority is defined by three factors:

Currently, all LNG terminals with either import or export capacity are included in the GFIT.

Terminal locations were approximated based on the written information available.

At the end of every biannual data update, descriptive statistics are generated using Google Sheets, R 4.0.0, and Python 3.8.2 based on the updated data set.

All data summary tables are broken down by fuel type (oil, gas, or NGL) and project status, and by either country, region, owner, or start year. Within these groups, the tables present either the total number of pipelines, the total pipeline kilometers, or the total pipeline capacity.

Pipelines that have multiple owners were prorated and assigned equal shares unless specific ownership shares were available. Kilometer tables were calculated using the pipeline’s publicly available length, when possible. If no length value is publicly available, pipeline length estimates are calculated using pipeline route coordinates in the GeoPandas 0.7.0 package in Python 3.8.2. Country and region tables were calculated by estimating the percentage of pipeline that falls into different countries. Country percentages were estimated using the GeoPandas 0.7.0 package in Python 3.8.2. Regions are defined by the International Energy Agency’s (IEA) World Energy Outlook report.

Projects with multiple owners were prorated and assigned equal shares unless specific ownership shares were available. Regional definitions are based on the definitions used by the International Energy Agency’s (IEA) World Energy Outlook report.

The following table provides data field definitions for the variables included in the Tracker’s table view and the data summary tables. These and additional variables are maintained in the GFIT’s data set.

The amount and quality of available information varies widely between projects. Some variables are almost always available, such as the approximate location, the operational status, and the product type. Start year is the most frequently missing value in both pipelines and LNG terminals. However, the missing Start Year values for LNG terminals are almost exclusively missing from in-development projects. Capacity, owner, and pipeline length are also frequently missing. More data is missing from pipeline projects than from LNG terminal projects.

The May 2020 release of the Global Fossil Infrastructure Tracker includes 846 LNG terminal projects, including 435 import terminals and 411 export trains. The following table shows the percentage of values missing from key variables by infrastructure type. 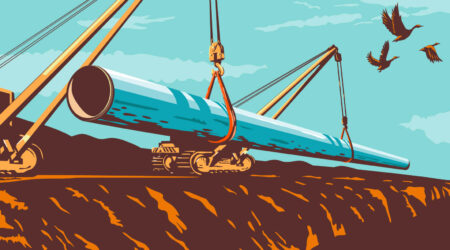